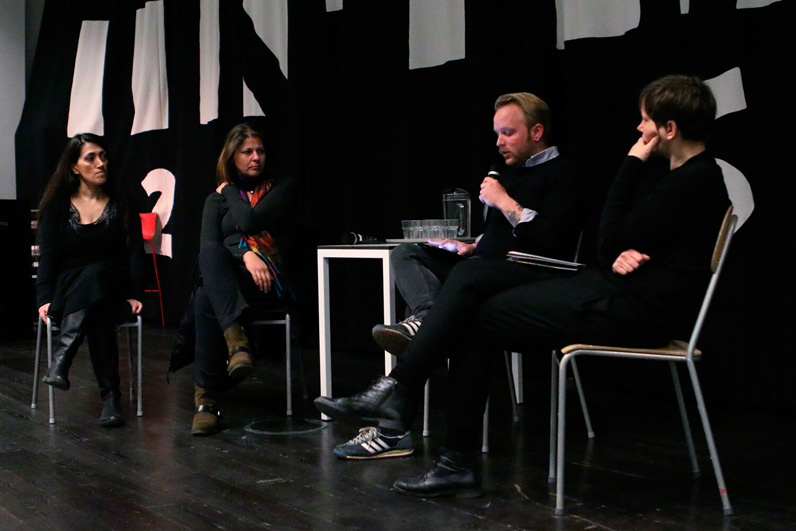 In ‘Cultural Exchange Rate’ speakers considered the meaning and value of cultural exchange in an imbalanced world. This discussion raised the challenge of having open attitude towards cultural exchange and the inherent difficulties given the existing inequalities in international participation. The discussion was introduced and moderated by Jeroen van der Hulst, Editor-in-Chief at Pamphlet Magazine (NL), with participants: Abir Boukhari, founder of AllArtNow, Damascus (SY); Nia Pushkarova, founder of Water Tower Arts Fest, Sofia (BG); Signe Vad, founder of Udstillingsstedet TYS, Copenhagen (DK). This discussion was made possible with support from the Swedish Institute.

Nafasi Art Space in Dar es Salaam, Tanzania, presented their background and current work in a discussion with historian Mikela Lundahl under the title ‘Visions and visibility – challenges for the artist-run scene in Tanzania’. The debate concerned power structures within the art world, east African and gender identity politics, western hegemony and hierarchy, international influence and the post-colonial context of these issues. Who is (not) represented and (how) is it possible to change? The participants were: Rehema Chachage, artist and artistic manager of programmes at Nafasi Art Space; Diana Kamara, artist and poet, Dar es Salaam; and Mikela Lundahl, PhD in History of Ideas with Research In Critical Heritage Studies, Gothenburg / Copenhagen.

The third discussion ‘Art in the margins’ considered migration and immigration, and asked how can artistic projects represent the unrepresented and illuminate the experiences of excluded communities. Erik Berggren (Museum of Forgetting) introduced Secil Yayali from the artist-run space Pasaj that operates in the Tarlabasi neighborhood, a historic area in the centre of Istanbul, that has always been a home for minorities suffering discrimination from Turkish authorities and the wider society, and Olson Lamaj from the artist-run space Miza (Tirana) presented artists who discuss the experiences of Albanian immigrants in their new countries of residence.

In addition to the public programme twelve participants from seven partner organisations and two guest (from Lithuania and Bulgaria, who became new partners) got together in twelve smaller meetings in the Meetings programme. A general working meeting dealt with the obstacles to publishing the unfinished pilot version of the database, and meaningful ways to extend the network’s experience by creating opportunities for other artist-run initiatives to share knowledge and experiences.

AIM Meetings over the years

On 18–20 September AIM Network's members took part in a planning meeting in Riga, Latvia. The meeting contained discussions on the future activities and programme development of the network in line with the planned application for Creative Europe' Read more...

Poland has a long tradition of grassroots initiatives, although most of them are characterised by ephemerality. Artists increasingly Read more...

Three panel discussions were organised at Supermarket Talks, which this year was held in Svarta Huset at Telefonplan, Stockholm.

AIM Riga, September 2014 was held at Totaldobze, Press House, Riga, with seven participants from five partner organisations. The meeting was preceded by a three-day workshop at Tasu Manor, Grobina in Latvia’s countryside, which was directed toward Read more...

AIM Athens 2014 was at Art-Athina in the Taekwondo Stadium, Athens, with thirteen participants from nine partner organisations. For the second year Art-Athina ran ‘Platforms Project @ Art-Athina’ (a section for artist-run spaces and artists’ group Read more...

AIM organised two panel discussions at Supermarket Talks, once again, as in the previous year, held in Studio 3 at Kulturhuset. First of the discussions was ‘Life Beyond the Budget – a panel discussion about alternative financial strategies’, with Read more...

AIM Helsinki 2013 was held at the Business Meeting Park Kamppi, with eleven participants from seven partner organisations. Included were visits and meetings with representatives from Huuto Gallery, Gallery Forum Box and MUU Gallery, where the part Read more...

Supermarket Talks were held in Studio 3 at Kulturhuset. The seminar started with Andreas Rib Read more...

AIM Mallorca 2012 was hosted at Can Gelabert in Binissalem, Mallorca with ten participants from five partner organisations, as well as Alvaro Campo from the Nordic Art Association. Based on the idea of creating a web portal and database/CMS for ar Read more...

AIM Stockholm 2011 was organised at Kulturhuset in Stockholm in conjunction with Supermarket 2011 – Stockholm Independent Art Fair, and with fifteen participants from seven partner organisations. During this meeting the network discussed ways in w Read more...

AIM Berlin 2010 was held at the Swedish Embassy in Berlin with nineteen participants from ten organisations. Initially the situation of the artist-run activities in the different countries were presented and compared, as well as the relationship t Read more...